You are here:
Advanced Somatic TherapyGeneral 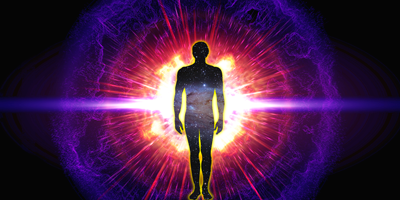 “We are all made of star stuff!” – Neil de Grasse Tyson

Humankind’s fascination with the stars has existed since we first gazed upon the shining pinpricks in the firmament of heaven. Over thousands of years we have come to understand that our fascination is more than mere appreciation, it is hard-wired into our biology. Our very tissues are composed of the particulates that were ejected during the first expression of matter in the Universe, The Big Bang.

I never really considered the impact of this truth on our bodies until I found myself face to face with it in a bodywork session.

A client had come to me with a very common complaint of low back pain, which, after a thorough assessment, looked to be caused by a tilted pelvis (hip bone) and slightly displaced sacrum. After settling him onto the table, I began working on softening some of the shortened or dense muscles, tendons and fascia (connective tissue wrapping of the body). Everything progressed smoothly and I finally reached the lumbosacral joint, the junction between the low back and the pelvis. This is where the session took an interesting turn.

First, I began to feel a gentle vibration in my hands, much like the buzzing of a pager (now I’m dating myself), which I dismissed as the tissue softening but then it got stronger. Heat started to radiate from both the back and the front of the body. The waves of heat and vibration intensified when suddenly something in my mind clicked, my awareness slid deep into my hands and my consciousness shifted.

In a fraction of a second, my whole perception of the interconnectedness of all things opened, expanding exponentially, the smallest components of my client’s body combining and extrapolating into a large Neuro-Holographic star chart connected to each structure via thin filaments of energy.

I could visualize and sense the relationship between each element of the solar map in front of me. The gravitational pull of each artifact registering as pulsing fields of light, the energetic balance showing up as levels of brightness. The health of the tissues was clearly showing up through the pulsating map in front of my mind’s eye.

Einstein’s “spookiest” quantum theory states that when two atoms are connected or entangled they interact / react with each other. Unaffected by time or space, the reaction is immediate, when a change is exhibited by one it effects the other instantaneously outside of time’s possessive grasp.

This experience of the Somatic (body-based) Star Chart opened in me an awareness that, as we are all made of “star stuff” our individual atoms are potentially connected to specific charted or uncharted regions of the Universe. By accessing the body state, my unconscious was able to link up with these maps to see the issues (celestial or otherwise) affecting the tissues.

There are many examples of this astronomical relationship not just in the quantum arena but also within and around our bodies.

Celestially speaking it is easy to see how our closest planetary neighbors effect our body and mind. The Sun, for instance, impacts our body and our mood quite easily. Sunlight stimulates the release of vitamin D, which assists in calcium absorption, nervous system communication (impulse transmission) and immune system strength. Lack of sunlight has also been linked to depression and Seasonal Affect Disorder (SAD).

The proximity of the Moon affects the tides of the planet, easily demonstrating how it can impact our own inner cycles and tides of our body. Many studies have been conducted looking at the effect the full moon has upon psychological wellbeing, the number of children delivered and emotional stability. Archetypally the Moon is tied into the hidden, watery aspect of our emotions and the mysteries of the feminine.

Astrologists have postulated for centuries that all the planets in our solar system play a part in our mental and physical make up. From the moment of our birth to the time we leave this protoplasmic organism we call a body, their movements are said to have a direct impact on our lives.

From all outside indications, my client was in a deep state of relaxation. His breath was slow and regular. His closed eyes swept gently from right to left indicating he was experiencing a deep REM state. My hands moved slowly, each movement shifting the inner star chart. Around the area of complaint I noticed a line of high potentiality and energy. This line pulsed and snaked through the lattice work of stars and celestial bodies. It landed in a quadrant of “space” to the left that showed a reddish hue, almost alarm-like. Taking my hands to this space on the body (around the lower left shoulder blade), my mind connected with the energy and extrapolated it further, turning it over and opening it up. I was amazed at the intricate nature of the patterns and vistas. In the back of my mind I was wondering how this could be happening?

I followed the alert line deeper into the inner space of this region to it’s nexus point. Here it anchored with root attachments to what I determined were cellular holograms or energetic progenitor patterns of the cells. Gently, utilizing tools I had cultivated in my years working at PRI, I extricated the tendrils, filled the energetic vacuums and brought balance back to the region.

Mentally backing out of the space, I noticed that the connecting line had changed color and intensity. There was no more reddish hue. Interestingly, the client’s breath shifted and deepened when this happened. Looking up at the clock I noticed almost and hour and half had passed in what had seemed like only twenty minutes. Time flies.

Not knowing what to do now with the vista spread out before me, I simply brought the awareness forward in my mind that the session was complete. Slowly, the chart receded and then condensed into a pinpoint of bright light. The light descended into the client and then seemed to disperse across his body. I had the sense that the “pattern” was integrating into his entire system.

During my post session check in with the client, he reported that his pain was gone. He also mentioned that tension he had been experiencing for years around his left shoulder blade had mysteriously disappeared. I was stunned. I hadn’t shared anything that I had witnessed during the session with him.

This experience occurs so often in my practice now that I have began to look more deeply at the relationship we have with the greater Universe around us, from the molecular to the physiological.

What are the implications of this information?

If it’s true that we are made up of and connected to the stars, what of it? How can we look into the sky and not feel a kinship to the great moving streams of solar systems, nebulae and planets?

How can we deny our own shadow self and yet accept the existence of ‘Dark Matter’ knowing that, in fact, the two may be connected in some miraculous way?

We are connected to the stars, so it behooves us to take care of our body, which may in some way support and strengthen the Universe around us.

The Practice of Sacred Eating
September 6, 2014